The ticket allows you to visit also the Correr Museum, the Archaeological Museum and the Biblioteca Marciana. 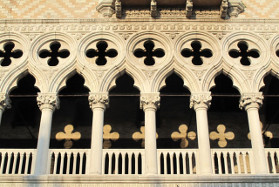 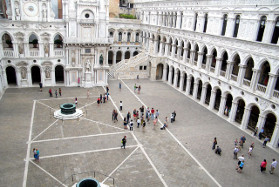 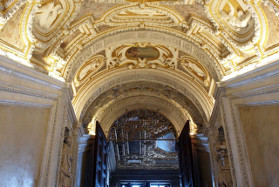 A bit of history of the Doges Palace

Doges Palace was probably built between the 10th and 11th centuries on the basis of a fortified central core. This nucleus was constituted with a central body with towers in the corners forming one of the masterpieces of the Venetian Gothic. In the 12th century, the first restructuring was carried out with the duke Sebastiano Ziani, who transformed the fort into an elegant palace. Later in 1200 a new expansion was realized.

Between 1339 and 1342 during the government of Bartolomeo Gradenigo, the palace began to obtain its present form. The doge Francesco Foscari extended the palace in 1424 towards the side of the Basilica of San Marco. In 1442 the architects Giovanni Bon and Bartolomeo Bon added the Porta della Carta. The inner part houses the apartments of the Doge and was built by the architect Antonio Rizzo after the fire of 1483. Throughout the 16th century there were several devastating fires alternating with restructuring and embellishments like the "Scala dei Giganti" (The Stairs of the Giants) and the creation of the main treasure: the Crucifixion of Tintoretto, painted to replace a damaged mural in one of the fires.

At the beginning of the 17th century, the architect Antonio Contin added the "Prigioni Nuove" (New Prisons), beyond the canal connecting them to the Palace with the Bridge of Sighs, where the convicted went on their way to the new prison. In 1797, after the fall of the Republic of Venice, the Palace was conditioned to house the administrative offices. The prison, called "i Piombi" (the Leads) by the covering of the roof, retained their old function. After the annexation of Venice to the Kingdom of Italy, the palace underwent several restructurings until 1923 when it was destined to become one of the most important museums of Venice.

What is the Doges Palace nowadays?

When the Doges Palace was built, it had a design similar to a castle, with towers in the corners as it was in a strategic point of access to the sea. With the pass of time, remodeling and fires, this majestic palace has become what we know today. Keep in mind that from this Palace, 120 doges directed the fate of the city of Venice for almost 1,000 years.

Currently, the Doges palace is a museum that offers exhibitions of great historical interest and is open to the public offering a wide variety of itineraries, including: Special tours of the "Secret Itineraries of the Doges Palace" and "The hidden treasures of the doge".

The Doges Palace offers an extraordinary experience for anyone interested in the history of the city of the lagoon and the design of the interiors of the palace that impresses more than one.

Curiosities of the Doges Palace

Did you know that the color of Doges Palace changes depending on the time of day thanks to the light? Doges Palace acquire a very delicate pink tonality always keeping in the symmetrical gothic gives a pinkish with white color.

Did you know that in the Doges Palace is the "Bocca di Leone", a kind of mailbox with lion face? In the past, the illegal practices of Venetian citizens could be denounced by depositing a complaint letter in this mailbox.

Did you know that the visit of the Doges Palace ends in the prison? This prison corresponds to the dungeons and the "Piombi" of Doges Palace, the aspect is definitely not welcoming and from here, in 1756, escaped the famous prisoner Casanova as he tells us in his memoirs.

Why visit the Doges Palace?

The façade of the Doges Palace is considered a Gothic masterpiece. Its interior is elegant thanks to the marble of Verona and is supported by stone arches supported by columns with magnificent capitals and sculptures in the corners. The main entrance of the Doges Palace was originally the "Porta della Carta", a 15th century Gothic door, through which we crossed a portico until reaching the Arco Foscari and the internal courtyard. Here we can find the famous work (15th century),the Staircase Of the Giants, where the doge was crowned.

How to visit the Doges Palace (Palazzo Ducale)?

Venice is a city that does not know the meaning of "low season", so even to enter the Doge's Palace there is always a long line. To avoid unnecessary waiting at the entrance, it is possible to book the ticket in advance by buying the Venice Museum Pass that allows entry to 11 Venetian museums, in alternative, the entrance to the St. Mark's Square Museums which also allows entry to the Correr Museum, to the Marciana Library and to the Archaeological Museum.

It is also possible to participate in guided group tours that provide for entry to the Palace or a walking tour of the city center. The latter is often also offered privately with a dedicated guide.

The Doges Palace called in Italian Palazzo Ducale, has a Gothic style and is located in the center of the city of Venice next to the Basilica of San Marco, the most characteristic monument of Byzantine art that gives you the possibility of accessing the balcony from where you will have a complete view of St. Mark square and the Bell Tower. It will allow you to enjoy incredible views of Venice being one of the most striking monuments of the Square.

The Biblioteca Marciana (Marciana Library), the Archaeological Museum, the Correr Museum, the Clock Tower and the well-known Baroque Bridge of Sighs, built in the 17th century, provide access to the palace's prison cells. 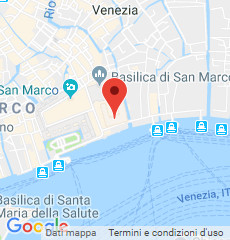