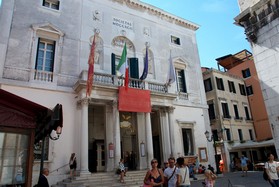 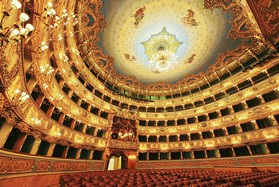 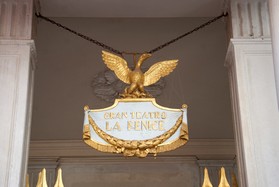 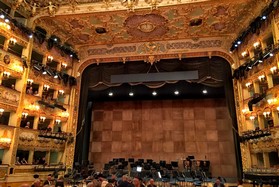 A little history of the Fenice Theatre

There has never been a better name for a theatre. Just as the phoenix, a mythological creature, rose from its ashes in a continuous cycle of life and death, Venice's most important theatre was reborn after two fires, which risked depriving the city of one of its most prestigious venues.

After losing the first theatre, bought by the powerful Venice family, the Noble Society of Scenographers decided to build a new one, which would be called Gran Teatro La Fenice, to symbolize the Society's ability to revive and continue its activity. The construction took place between 1790 and 1792, but much of it was destroyed in the fire of 1836. The architects Tommaso and Gian Battista Meduna were in charge of the restoration with a readjustment of the original project. During the following century, it was restored several times, until the terrible fire of 1996, due to which the theatre was destroyed.

It was then faithfully rebuilt until it was inaugurated again in December 2003. As a Christmas present to the city and all of Italy, a week of concerts and events was organized to welcome the return of the La Fenice Theater, which rose from its ashes to continue offering a space worthy of the Italian opera tradition.

What is the Fenice Theatre today?

The Theatre is today one of the favourite places for opera music and its lovers and performers. And it remains a privileged place to present to the world artistic scene the novelties of opera and classical music in general. Since the reopening of the Theatre, and precisely since January 1st 2004, the Theater has hosted the famous New Year's Concert, transmitted live by Rai and also by the main television channels of Germany, Austria, Switzerland, Albania and France.

The concert always ends with the famous aria "Libiamo ne' lieti calici", the toast of Giuseppe Verdi's Traviata. The Theater is also an exhibition space: you can visit its beautiful interiors, such as the atrium, the foyer and the Apollonian Rooms. In the stalls, you can admire the typical red leather armchairs, the magnificent central chandelier and the golden balustrades.

Finally, you can also see the upper galleries, with the royal lodge, destroyed during the 1848 uprising and later reconstructed. In the third row of boxes, you can visit the permanent exhibition dedicated to Maria Callas, the very well naturalized Italian-American soprano, the protagonist of an essential part of the recent history of opera music in the Peninsula.

Curiosity about the Fenice Theater

Although the first fire was due to a defective stove, the one that destroyed the theatre in 1996 was undoubtedly an arson. Enrico Carella and Massimiliano Marchetti, two electricians who worked at the theatre, realizing that they could not finish the work in time, decided to start a small fire, to attribute the delay to causes beyond their control.

As you know, the fire was not so small and destroyed the entire theatre. Both were convicted and served a few years in prison (in Carella's case, after a daring escape to Central America). When it came to rebuilding the theatre, the motto "how it was, where it was" was adopted to represent the intention to rebuild the theatre in the same place and with the same structure as before.

Did you know that the history of the theatre is intertwined with that of some European royal families? Franz Joseph, the Emperor of Austria, and his famous wife Sissi, both captivated by the beauty of the building, often visited this place. The future of the Italian monarchy was also decided here, as it was here that Vittorio Emanuele III of Savoy and Elena of Montenegro, who would become his bride, met.

Why visit the Fenice Theatre?

The Theatre is one of the most beautiful in Italy and with a particular and fascinating history. If you decide to visit it, you can immerse yourself in the world of opera music and at the same time admire the incredible architecture that has been reborn from the destruction of the flames.

Besides, you will visit the place of the debut of some of the most famous operas. Here, the premieres of Verdi's Rigoletto and La Traviata, Tancredi and Sigismondo by Rossini, Bellini's I Capuleti e i Montecchi, Belisario and Donizetti's Pia de' Tolomei.

How can I visit The Fenice Theatre?

To see this jewel of cultural architecture, a symbol of classical music and opera, you can buy the entrance ticket to the Teatro La Fenice in combination with the Audio Guide of the city of Venice. We remind you that the ticket entitles you only to visit the theatre building and not to attend concerts and operas in the program of the opera season.

For an immersion in art, you can visit the prestigious Guggenheim Museum, which contains some of the symbolic works of contemporary art by artists such as Pollock, Picasso, Dalí, Duchamp, Magritte, Chagall, Fontana and many others.

More art thanks to the Ducal Palace Museum, the Natural History Museum, the Archaeological Museum, and those of Murano Glass and Lace of Burano.

Finally, you can not miss a visit to St. Mark's Square and the Basilica of the same name, symbols of the city and witnesses of the glorious past of one of the Maritime Republics. 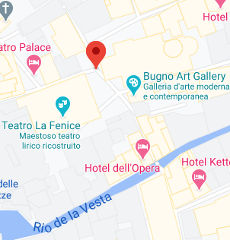