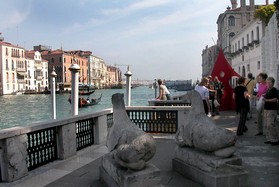 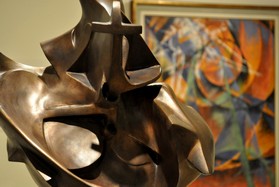 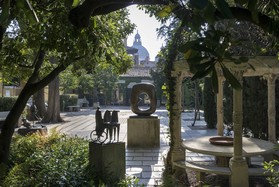 A little history of the Guggenheim Museum

Peggy Guggenheim, the heiress of an American family of tycoons and art lover, gave life to one of the most important collections in the world. After having founded, travelled the world, met some of the greatest artists of the contemporary international scene and founded the first museums in London and New York, Guggenheim fell in love with Venice and at the end of World War II decided to go live in the city.
In 1948 she bought the Venier Palace, which became her private residence, but also the place where she could store and exhibit part of her immense collection of paintings. In fact, until 1979, the year of his death, the house-museum was opened to the public free of charge to allow everyone to appreciate the beauty of art, from Cubism to Surrealism, from American Modernism to Italian Futurism, from Expressionism to Abstractionism. The collection was expanded by Guggenheim throughout its stay in Venice, along with its sponsorship of emerging artists. Upon her death, the collector bequeathed the museum to the Solomon R. Guggenheim Foundation in New York, and her ashes were buried in the corner of the garden with her beloved dogs

What is the Guggenheim Museum today?

The Guggenheim is the second Museum most visited in Venice after the Doge's Palace. Its collection contains paintings by the most important contemporary artists such as Pollock, Warhol, Magritte, Dalí, Picasso, Fontana, Rothko, Marini and many others. In addition to the permanent collection, the Museum also hosts temporary exhibitions and exhibitions in collaboration with other museums. Also, it is an important training centre: from a project dated 1980 it has come to organize an international internship for all people interested in building a career in art and Museum. In 2016 this training project brought about 150 students from all over the world to the Museum, confirming that this small exhibition space is, in fact, one of the most important artistic and cultural centres in Europe and beyond. The Museum also organizes many activities for families, schools and the general public and has a museum path accessible and inclusive to all.

Curiosities about the Guggenheim Museum

The Venier dei Leoni Palace, which houses the Guggenheim Museum, has a history shrouded in mystery! We do not know why it is an unfinished building, nor who built it. As for the first fact, it is the only Venetian palace left "halfway": construction began in 1748 under the eyes and expert hands of the architect Boschetti, who had planned a large building of at least three floors. And this could be the reason for the lack of completion: perhaps the work would have been so long and expensive that it was realized that there was not enough money to bring the work to an end. Another possible reason was that the neighbours had something to do with it: the building across the street was owned by the Correr family, who would have resented the idea of having another building in front of them much more imposing than their own.

Even on the name, we have no specific knowledge: the Venier family was one of the most important in Venice, and maybe that's why the palace is attributed to them since they were the only ones who could afford even to start such work. As for the Lion, instead, there are two explanations: some say that a real lion lived in the gardens; others, instead, claim that the name refers to the two feline heads on the facade placed on the water's edge.

Why visit the Guggenheim Museum?

If you are visiting Venice and your passion is contemporary art, visiting the Guggenheim collection is a unique opportunity! It doesn't matter if you visit the Guggenheim Museum in Bilbao or New York: even in Italy, you will have the chance to admire up close the works that have made art history, such as Marc Chagall's Rain, Max Ernst's Bride's Dressing of the Bride, Picasso's Beach, Box in a Suitcase by Duchamp and Salvador Dalí's Birth of Liquid Desires. Furthermore, you can't miss the opportunity to visit one of the most particular palaces of the city, testimony of a recent past, but not too much, and of an indissoluble bond between Venice and art that goes beyond time and space, thanks also to the foresight of a great woman like Peggy Guggenheim.

How can I visit the Guggenheim Museum?

To visit one of the most evocative exhibition spaces in the area, you can buy the entrance ticket to the Guggenheim Museum + the Audio Guide of the city of Venice. Discover Venice in the company of our audio guide and admire this jewel, a city made up of 120 islands, joined together by bridges.

Venice is full of attractions, and the choice will be difficult! Indeed, you can't miss a visit to the San Marco complex, with the square, the basilica, the Correr Museum and the Archaeological Museum.

If music is your passion, instead, you can visit the beautiful Teatro La Fenice, one of the symbols of the city, one of the main poles of opera music on a national level. You can't miss the house-museum of Carlo Goldoni, 18th-century playwright son of the Republic of Venice.

Other must-see stops are the Glass Museum of Murano, the Lace Museum of Burano and the Museum of Natural History.