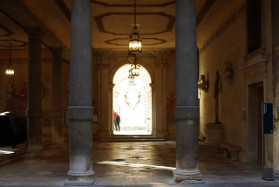 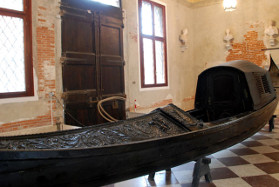 A bit of history of the Ca 'Rezzonico

Ca 'Rezzonico is a magnificent palace, now the Venice Museum of the 18th century, was designed by the greatest Baroque architect of Venice, Baldassare Longhena of the aristocratic Bon family and its construction began in 1649. In 1682 the construction works were suspended and the building remained incomplete until Giambattista Rezzonico, merchant and banker, originally from Lombardy moved to Venice and bought the building in 1751 commissioning the works to finalize its construction to Giorgio Massari, one of the most recognize and eclectic architects of the mid of the 18th century. The works were completed in 1756.

The building decoration was commended to painters who were working in Venice at that time. Giambattista Crosato was the author of frescoes in the hall, in collaboration with Pietro Visconti and Giambattista Tiepolo, who were in charge of the two ceilings made in honor of the marriage between Ludovico Rezzonico and Faustina Savorgnan.

The building was completely finished in 1758, when the younger brother of Giambattista, Carlo Rezzonico, was elected Pope Clement XIII. This event marks the summit of the family fortune. However 50 years later this powerful family died out. Thus began for the building and for its artistic heritage a long, difficult and tormented season of dismemberment and dispersions.

In the 19th century it had different owners until later the Count Lionello Hierschel of Minerbi, yielded it in 1935 to the city of Venice after long negotiations.

A skilled tourist guide at your disposal!
Discover the museum with your private guide!
Reserved entrance, no need to queue and you can decide the starting time of your visit!

What is the Ca 'Rezzonico nowadays?

The museum was reopened to the public in June 2001 and the Ca 'Rezzonico Palace is now home to the Venetian Settecento Museum.

The staircase next to the cafeteria leads to the Mezzanine Browning, which now houses the Mestrovich collection including works by artists such as Jacopo Tintoretto and Bonifacio de 'Pitati. The visit of the Museums Collection begins on the grand ceremonial staircase of Giorgio Massari on the side of the palace opposite the Grand Canal. The first floor has a total of eleven rooms with paintings, sculptures, frescoes on the ceilings and collections of 18th century furniture.

The second floor opens with the "portego" (the long central hall, typical of the palaces of Venice) in which we find two of the first works of Canaletto; you can not miss the rooms dedicated to the work of Pietro Longhi and Tiepolo Giandomenico with original frescoes on the walls of Villa Zianigo. The third floor contains not only the three rooms of the former pharmacy (Farmacia Ai do San Marchi), but also the remarkable collection of paintings by Egidio Martini.

The layout of the palace takes the visitor through the different rooms on the first floor with a wide selection of clothing and other accessories that are part of the permanent collection.

Curiosities of the Ca 'Rezzonico

Did you know that if we compare the Ca 'Rezzonico with the Doges Palace, it is smaller and less majestic? However this museum has some rooms that can be more beautiful and striking.

Did you know that until 1908 the pharmacy was in Campo San Stin in Venice? Most of the pharmacy, majolica vases and objects of the finest Murano glass, date back to the mid 18th century.

Why visit the Ca 'Rezzonico?

Ca 'Rezzonico is one of the most important buildings in Venice and at the same time is one of the few that can be visited today. It is located on the bank of the Grand Canal in the district of Dorsoduro. Ca 'Rezzonico is a rich Venetian residence that houses a valuable collection of 18th century Venice furniture and paintings.

The donations of Egidio Martini include several paintings, almost entirely belonging to the Venetian school from the '400 to the beginning of 900. This marvelous collection includes works by Cima da Conegliano, Alvise Vivarini, Bonifacio de 'Pitati, Tintoretto, Palma the Young, Bernardo Strozzi, Ippolito Caffi, Emma Ciardi among others, a jewel in Venice to discover.

How to visit the Ca' Rezzonico?

The Ca' Rezzonico is undoubtedly a magnificent museum dedicated to 700s Venetian style and to visit it is possible to buy the tickets online. The entrance is also included in the Venice Museum Pass, which allows access to 10 museums in the city.

It is also possible to request a private visit to be able to have a careful and detailed explanation of the works exhibited inside the museum. This type of visit is usually combined with a walking tour through the historic center of Venice.

If we take a water taxi from Santa Lucia Station in the direction of St. Mark square, we will pass below the Rialto Bridge which is located before reaching Ca 'Rezzonico. This is the oldest bridge of the four bridges that cross the Grand Canal; it is also the most famous bridge thanks to its design and history. Rialto Bridge was for years the most important economic center of Venice.

Very close to the Ca 'Rezzonico Museum of Venice, one of the most beautiful in the city, is the building belonging to the Accademia Gallery of Venice which contains the largest collection of Venetian art and is one of the most important art galleries in the world.