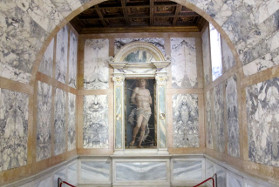 A bit of history of the Ca 'd'Oro, Franchetti Gallery

Ca 'd'Oro is an ancient patrician palace that dates back to the 15th century. Giovanni and Bartolomeo Bon built this building from 1442 requested by the procurator of St. Mark (San Marco) Marino Contarini. This beautiful building in Venice is a good example of the change from the Gothic to the Renaissance style. The marble traceries of the first and second floors and the parapets of the windows and the balconies clearly show elements of the late-Gothic period, while the colonnade facing the canal and the small square windows of the right wing allow to see the Renaissance forms.

The cornice and cresting, with their graceful and delicate forms, follow the local Venetian taste that was later imitated. The palace is incomplete, it lacks the left wing and this produces some asymmetry of the facade. The building was purchased years later, in 1894, by Baron Giorgio Franchetti, who in 1916 donated it to the Italian state. The artistic collections of the palace were significantly increased after this donation.

What is the Ca 'd'Oro, Franchetti Gallery nowadays?

The Ca 'd'Oro is a well-known building in Venice, located in the Cannaregio district overlooking the Grand Canal. Its name derives from the fact that originally some parts of its facade were covered with a golden edge, forming part of a complex polychromy that pitifully has been lost with the pass of time. However, this building is considered one of the best examples of Venetian Gothic.

Today Ca 'd'Oro, after a deep restoration, has been transformed into a museum and houses a beautiful art collection belonging to Baron Giorgio Franchetti.

In this Gothic Venetian style palace, visitors can admire many photographs of the Venetian school, among them the famous San Sebastiano by Andrea Mantegna and other masterpieces of the Tuscan and Flemish schools, as well as small and wonderful bronze statues and sculptures from the Renaissance. In the Ca 'd'Oro annex, there is a very interesting collection of pottery found in the Venice lagoon.

Did you know that in the 19th century, this wonderful building became the property of the dancer Marie Taglioni? Marie proceeded with the "cleaning" of the place and ordered the removal of many of the original features of the palace.

Did you know that the project that occupied much of Franchetti's life was to make the Ca 'd'Oro museum a place to collect his collection? Luckily or unfortunately, he could not see his dream come true.

Of the many and beautiful palaces that decorate and adorn the city of Venice the palace Ca 'd'Oro stands out as one of the most elegant. As its name indicates, "Golden House" is the reflection of a building that sums up opulence, luxury and power. Probably its façade is the most surprising and elaborate of all the palaces of the Grand Canal banks.

How to visit the Ca' d'Oro, Franchetti Gallery?

To visit the Ca' d'Oro, Franchetti Gallery, a magnificent example of a noble Venetian house that is now a museum, you can buy your tickets online.

Very close to the Ca 'd'Oro is the Rialto, one of the oldest parts of Venice, an area known for its market and the famous Rialto Bridge. Rialto became an important district when in 1097 moved here the main market of Venice. This market is located in the neighborhood of San Polo and has two areas, the area dedicated to the sale of fruits and vegetables, and the area of fish sales.

Nearby is the well-known Rialto Bridge, the oldest and most famous bridge that crosses the Grand Canal, probably the most famous in the city. A little further on is the Ca 'Rezzonico, a splendid building that currently houses the Venetian 18th-century Museum. 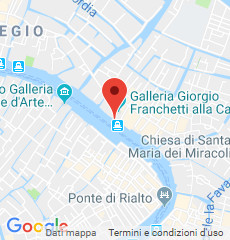