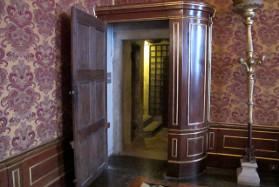 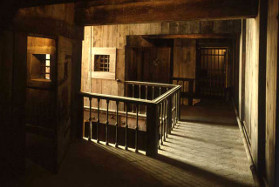 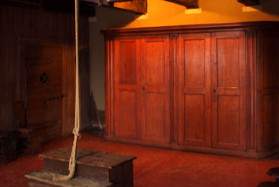 A bit of history of the Doges Palace  Secret Itineraries

The Doges Palace is a masterpiece of Gothic architecture. The structure consists of the accumulation of building elements and decoration, from its original structures of the 14th and 15th centuries to important details of the Renaissance and opulent fragments of Mannerism. Doges Palace is composed of three large blocks that include previous constructions.

The wing towards San Marco (St. Mark) Square contains the Great Council Hall which is the oldest, rebuilt after 1340 onwards. The wing of the Square is known as the Court Rooms as it contains the Sala dello Scrutinio, built to its current form from 1424 onwards. On the canal wing are the Doge's apartment and several government offices, built during the Renaissance between 1483 and 1565.

The entrance to the Doges Palace is by the Porta del Frumento, known by this name for the "forage office" that was nearby and which was accessed through the 14th century façade facing the sea. On the ground floor are the public services and the Textile Museum, the area that was once destined for the palace kitchen is currently occupied by the cafeteria and a room for temporary exhibitions.

What is the Doges Palace  Secret Itineraries nowadays?

The tour begins in the large and sunny courtyard of the Doges Palace, a narrow "door" will lead you to the small and damp cells of the "Wells" (Pozzi), the gloomy and inhospitable prisons where, in the days of the Venetian Republic, the prisoners languished in conditions of extreme difficulty.

Nowadays with 50 rooms, houses paintings ranging from the 13th century to the 18th century. The highlights are the famous Madonna di Ognissanti by Giotto, the Battle of San Romano by Paolo Uccello, the double portrait by Piero della Francesca, Federico da Montefeltro, the Birth of Venus by Botticelli; in addition to three works by Leonardo, one by Michelangelo, a few by Raffaello and many by Tiziano. All paintings inside the Uffizi Gallery have been displayed chronologically, so it is possible to fully appreciate all the innovations in art throughout the centuries.

Then we will visit the Stanza della Tortura (Torture Room), also called the Chamber of Torment which once connected directly to the prisons, where interrogations took place in the presence of the judges until the Piombi, the famous prisons under the roof of the palace whose name derives from the Cover with lead plates. Giacomo Casanova, protagonist of a legendary escape in 1756, was imprisoned here.

Through the attic one goes to the Hall of the Inquisitors. From here you can go to Sala dei Tre Capi (the three chiefs room). Finally, through a narrow corridor, we will enter the Hall of the Council of Ten.

Please take into account that the visit of the Secret Itineraries of the Doges Palace includes very narrow passages and very steep stairs.

Did you know that in the days of those convicted to death of Doges Palace they had a last chance to save themselves? This possibility consisted of the "turning of the column". The attempt was to rotate around the column, without slipping, but almost nobody was able to complete it. At the moment, it is possible to see one of the columns of the Doges Palace that is slightly twisted inwards.

The Secret Itineraries of the Doges Palace meander through several rooms on a journey through the centuries of the Serenissima where the most important activities related to the administration of the State and the exercise of power took place. This route offers an attractive and interesting presentation of the civil and political history of the city, its organization and its justice structures.

How to visit the Secret Itineraries of the Doge's Palace?

From the Santa Lucia Station you can take a vaporetto (waterbus) or walk to St. Mark Square, one of the most famous squares in the world. On your tour of the Grand Canal you will discover a vast number of palaces and centenary houses that are on its banks, such as:

The Ca 'D'Oro represents the most complete example of the new Gothic architecture of the late 14th century and the first half of the 15th.

The Accademia Gallery of Venice with its important collection of Venetian paintings from the 14th to the 18th century, which includes works by famous masters such as Bellini, Giorgione, Carpaccio, Tiziano, Tintoretto, Veronese and Tiepolo.

In addition, very close to the Doges Palace is the departure dock to visit the islands of Venice: Murano, Burano and Torcello.

Starting Time: 10.10 am, 12.10 pm
Duration: about 1.30 hours (once the tour is over, you may stay inside the Museum and visit freely)
Language: English
Frequency: Every day in the morning, not available on Christmas Day and New Years Day.
price: 29.00 Euro per person.

15 minutes before the tour starting time at the ticket office of the Doges Palace (Palazzo Ducale) - Venice.