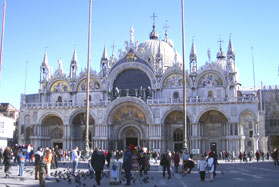 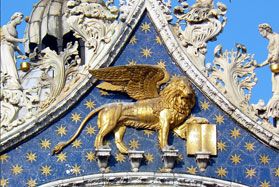 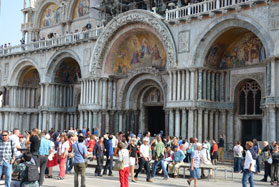 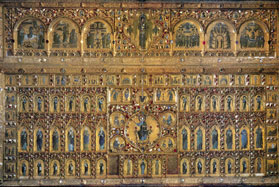 A little history of the Basilica of St. Mark

Originally this building was to be an extension of the Doges Palace, however the construction of the Basilica of St. Mark, which began in 828 and ended in 832, was made to house the body of St. Mark the Apostle brought from Alexandria to who they named protector of the city. This was a fundamental fact for Venice to be constituted as an independent episcopal seat.

The works of the present basilica began in 1063 in Byzantine style to represent the power of the prosperous Venetian Republic. This basilica was built respecting the model of two basilicas of the ancient imperial city of Byzantium with a central plant in the shape of a Greek cross, with five large domes and a particular mixture of ancient and oriental art.

Over time, the Basilica underwent several modifications, especially as regards of decoration, pointed Gothic arches, Sant'Alipio arch, 17th and 18th century sculptures and mosaics of the main façade, bas-reliefs that represent the professions and zodiac signs of the central gate, the marbles that come from the East, the porphyry figures of the Tetrarchs and the horses of St. Mark. The result is a stunning and beautiful blend of styles.

The basilica as we know it today, even though it was modify, has a Greek cross base with five domes. It became the cathedral of the city in 1807 and has more than 4,000 square meters of mosaics, many of them belonging to the 13th century, also has 500 columns of the 3rd century.

What is the Basilica of St. Mark today?

The Basilica of San Marco is now and has always been the center of public and religious life in Venice. Today, this basilica welcomes hundreds of thousands of visitors every year. This basilica has a very special historical interest since it was here where the Dukes of Venice were consecrated.

Did you know that during the high tide (acqua alta) you can visit the basilica walking through catwalks? When the Adriatic Sea rises level Venice floods, high tide means about 90 cm above its normal level. In case of immediate flood, the alarms of the city sound and some walkways are placed in the zones with more traffic. The lowest part of the city is the St. Mark Square (San Marco Square) and its surroundings are the first area to flood, but do not worry, you can visit this spectacular basilica anyway.

The Basilica of St. Mark is the most important religious temple in the city of Venice. It is located in the St. Mark square (Piazza San Marco), next to the Doges Palace, and has always been the center of the public and religious life in the city.

The Basilica is one of the most beautiful cathedrals in Europe and around the world. This basilica is the fruit of different styles, however over the years and its restructuring still preserves oriental aspects that can leave visitors astounded by their particularity and splendor.

St. Mark Basilica is an intriguing combination of architectural and art styles. It is a testimony to the wealth and power of the Serene Republic of Venice as well as the reckless adventures of its inhabitants in the Mediterranean as merchants and conquerors.

How to visit the St. Marks Basilica?

The entrance to St. Marks Basilica is free, but the entrance line is usually very long, so it is advisable to book a guided tour of the Basilica to avoid unnecessary waiting in line.

The Basilica of St. Mark located in the St. Mark Square (Piazza San Marco) where it is possible to visit other magnificent museums of Venice. To start, next to the basilica is the Doges Palace, this sumptuous building was the home of the rulers of Venice for centuries and still today is a monument to wealth and power. Here it is possible to choose between several routes but the one of the "Secret Itineraries of the Doges Palace" will surely surprise you. This is a tour through the political and civil history of Venice passing through the secret places of the Palace protagonist of the activities of the Serenissima.

In this same square you can visit the Correr Museum, a building rebuilt at the beginning of the 19th century in an elegant neoclassical style. Here is also the Marciana Library, which is open to anyone interested in reading, studying, consulting, searching or just walking through its rooms and visiting it.

On a short distance from the Basilica of St. Mark is the departure pier to visit the wonderful islands of Venice, Murano with its spectacular crystals, Burano with its elaborate lace and Torcello which with only 17 residents has an invaluable archaeological heritage.